“So what brought you to Oak Island, Kristi?”
“Well…I…I’m running from a man.”
“Really?! That’s how I got here too.”
It was a warm, sunny day in Oak Island on the afternoon I had that conversation over a sea-side lunch with my new friend Bonnie Grace. She swears she knows me from ETSU in Tennessee. We both attended college there around the same time in the 1990s, so it would make sense. Those of you who know my hometown-dynamic know that everybody knows everybody. And everybody crosses paths with them on regular basis, whether they want to or not. She is quirky, funny, and has a beautiful soul. But the one thing I like the most about her is that she is well-schooled in wisdom.
Most of you know by now that I’m in North Carolina taking a very much-needed respite from life in general. I’ve rested more over the last 4 months than I probably have in years. And I’ve paid more attention to self-care so that I can nurture my own soul. Otherwise, I’ve been known to piece myself out to everyone else on a too-regular basis. Living by the sea is indeed a magical thing. And I’ve certainly come to adore my Mermaid Life way more than I ever liked my Real Life. If you’ve followed my blog at all, you already know I came here to grieve the loss of three friends. All of them died unexpectedly over a 9-month period and grieving for the dead is harsh, to say the least. In fact, I would’ve told you a couple of years ago that grieving for those who have left the earthly realm is the absolute hardest thing a person ever has to do. But today, I’m here to tell you that in my experience, it isn’t. Grieving for someone who is alive, yet not with you, is much more despairing. Yes, I came here to grieve a myriad of things. My divorce and the deaths of my friends. But I also came here to grieve the loss of the broken man I loved. One who is still very much amongst the living. A man who is so split and fragmented, that even Gorilla Glue couldn’t piece him back together. I spent years trying to nurture his hurts by kissing his bruises while desperately attempting to band-aid his heart each and every time someone pricked it with a spindle. And when someone hurt him, I physically ached. I so wanted to be an agent in his healing the way he had been in mine. But little did I know I was just re-wounding my old past hurts in the process of scabbing over his. 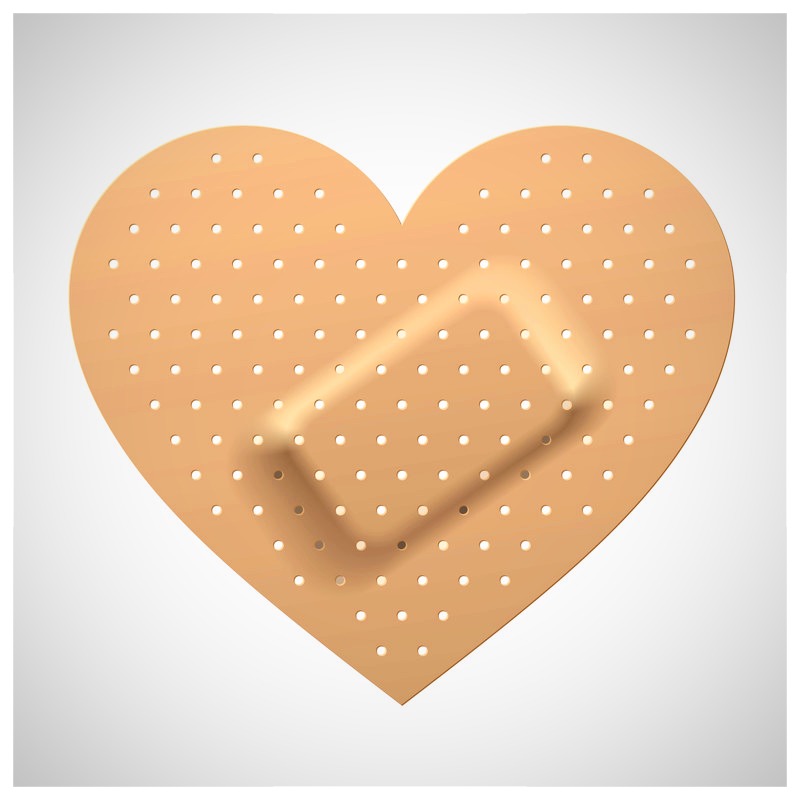 This wounded man, he isn’t a bad man. He’s actually a very tender man, but you wouldn’t know that by looking at him from the outside in. He doesn’t show that side of himself to others because he perceives being vulnerable as weak, and he can’t be a weak man, by God. No, siree! I’ve told him a million times how sad I am that he can’t unmask who he really is because so many people are missing out on the real him, but until he allows himself to operate out of something other than fear, his life will never shift for the good.
When I think about his tenderness, one specific event comes to mind: I had stopped in to visit him at work one afternoon, and while he was tending to work-related things, I was in his private office checking my email. I had kicked my shoes off and made myself comfortable because I figured it would be awhile before he was able to hang out with me and catch me up on his day. What I didn’t realize is that I had bloodied my heels on his office chair—badly. Oh, but he noticed it! “You’re bleeding! It looks like helter-skelter in here!” and off he went to gather paper towels, band-aids, and peroxide. I tried to take them from him, but he impatiently shook his head, lowered himself to the floor, and lovingly cleaned up and bandaged my bloody feet. In my then-43 years of life, not one single person had ever done that for me and before I knew it, I was on my feet, watery eyes and all, planting a kiss on him to thank him. Tender. He’s tender.
We’ve all been in the place of loving someone who is broken. They didn’t get that way overnight; in fact, it probably took years for them to become as beaten down as they are. We want to put them back together and find a way to make everything right in their world. But the truth of the matter is, no matter how badly we want to, we can’t. If you are a rescuer like me, you want to fix them too and as they say, it takes one to know one. I’ve spent years trying to fix others all the while continuing to get cut on their broken, shattered pieces in the process when my focus really should have been on rescuing myself. Don’t misunderstand me, there’s nothing wrong with loving a broken man; in fact, it takes a very strong woman to endure that and see it through. I gave it my all, I truly did, but the time came for me to love myself more than I loved him—so I ran—because I knew if I didn’t, I would never, ever heal. 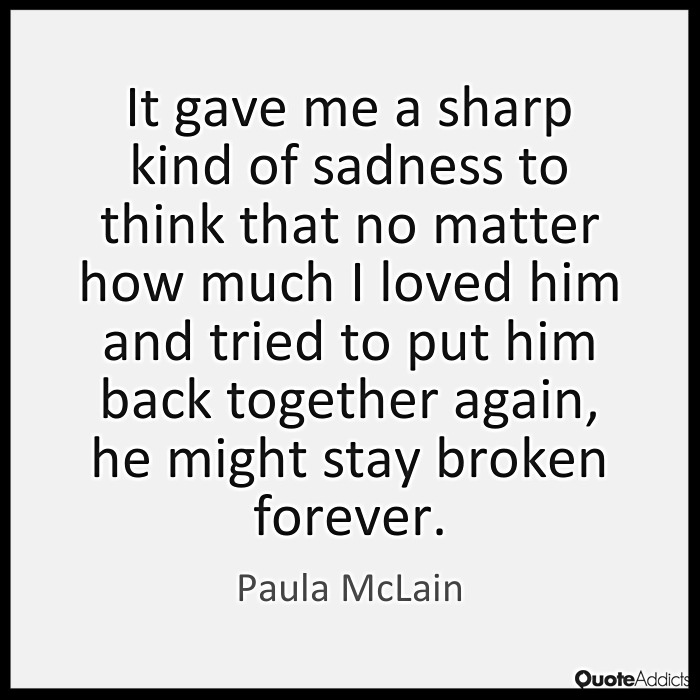 I’ve blamed myself for almost everything that went wrong in our relationship, even though deep-down, I know he was the catalyst for things being as chaotic as they were. I told Bonnie Grace the good, bad, and ugly of our relationship that day, and I have to tell you, I’ve never had another woman understand it the way she did. She gets it, I thought, and I can’t tell you how comforting that was to me. She reminded me that the reason I stayed as long as I did is because I was too busy looking at the wounded-child-him, rather than noticing the angry-man-him. It’s all misogyny, she said—and I know that I know that I know that she’s right. Hurting people hurt people. That’s the cold, hard truth right there, folks.
My heart, although still bleeding, is slowly beginning to heal.  And even though I still cry over him, I’m coming to recognize that I did everything I possibly could to save him, our relationship, us. The problem is that I  was the only one fighting for that. Our therapist has told me for years that sometimes, love isn’t enough. But the fairytale-loving child that resides within me has always believed it was. I’m not going to get into all the sordid details of the ways he hurt me, because they are innumerable, and many of those wounds are still very raw; but I will tell you, as hard as it is for me to admit it, that I still love him. In fact, I will probably love him until the day I take my last breath as a little old lady. But the honest to goodness truth is this: he is not safe for me to love right now, so I have to love him from a distance while still allowing myself to move forward in order to create the life I was always meant to live. 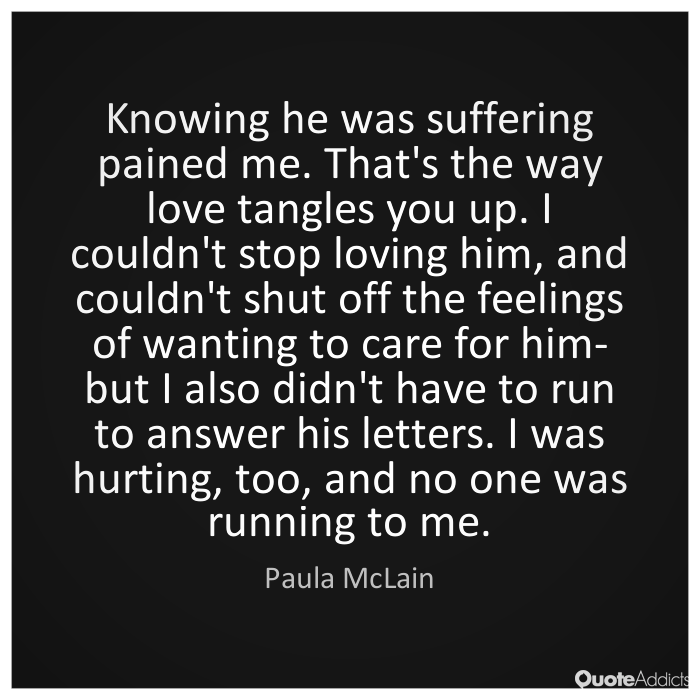 Bonnie Grace doesn’t know it, but she healed a piece of my heart that afternoon when she not only recognized my pain, but understood it, without passing judgment. And the one thing she said to me that still sticks with me is this:
“He will never not lie to you. He will never not cheat on you. And the reason he does the things he does to hurt you isn’t because of who you are sweetie, but because of who he is.”
If you love a broken man, read that again.
Sometimes, love really isn’t enough.
See you next week.

« The Invitation: A Poem By Oriah Mountain Dreamer
Five Questions with Mandy »